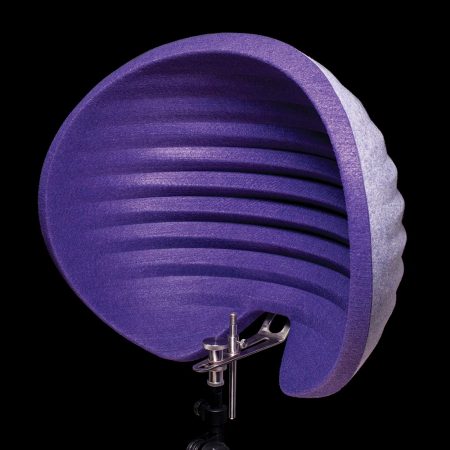 In recent years, portable iso-booths or reflection filters have become quite popular. Sadly for the unsuspecting songwriter or recording artist, not all such products are created equal. Some are very effective. Some are moderately effective and others are similar to the effective ones only in general appearance.

A while back, I bought one from a company that shall remain nameless here. It was pretty effective and I was happy with the price but I found the mounting scheme was cumbersome to the point of being impractical and that’s why I promptly returned it. I also noted that it did not balance well with a mic attached and did not offer coverage from reflections above and below the mic: only the back and sides.

When I recently discovered the Halo from Aston Microphones, my first thought was that the size was a bit extreme. Then I noted that it offered absorption and diffusion on the sides and back as well as the top and bottom of the mic. When I looked more into it and found that it was also designed to balance well with a microphone attached, I contacted the company to discuss it further. I was very impressed with their thoughtfulness and passion.

Aston was kind enough to send me a Halo in (black) Shadow for review. As I imagined, the box was big and so is the Halo itself. However, it’s not excessively heavy being made mostly of recycled PET felt. It’s a pretty straightforward design that does offer better mic balancing as I learned in weeks of testing the Halo with multiple mics. Mounting it to a straight stand (or boom stand with elbow) was easy. In fact, the Halo is so light and well-balanced itself that one vocalist balanced the review unit on her head while the mic stand was reconfigured. I also suspect that the Halo may be used as a flotation device in the event of a water landing.

My assistant and I tested several mics in the Halo. The first one we tried was the Multideluxe (FET LDC) from Braingasm Lab, which is a big mic that requires a shock mount. We also used an Aston Origin which is about a third of the size of the Multideluxe and has mic-stand threading on the bottom that made mounting and depth adjustment very easy. The same was true for the Cloud 44A ribbon mic.

In all cases, when it came to voice-over, singing or a one-mic setup to capture vocal and acoustic guitar, the Halo did an amazing job of mitigating room reflections and resonances. This was especially helpful for the figure-8 Cloud 44A. The Halo also made it faster and easier to determine which mics were best for which source because the room was essentially taken out of the equation in tracking. That said, obviously, if the talent backs up too far, your signal-to-noise in front of the mic will change but you can experiment.

About halfway through this review process, a client sent me a solo vocal take he cut in his studio and I told him that I could hear the room. He insisted that the room was very well treated. After some discussion, I recommended a Halo. He went out and bought one that day, set it up and cut a new take. The improvement was quite apparent to both of us and now there is no looking back as he will be using his Halo on every song.

In other words, I have a very positive opinion of the Halo and my hope is that Aston will allow me to continue reviewing it until I retire! I obviously recommend it to my clients but some have sticker-shock. Maybe Aston can find a way to lower the price a little by increasing production volume or maybe allowing me to build them. In all seriousness, the note on pricing is relative to other reflection filters. However, the Halo offers a greater improvement in sound than a new mic or preamp in many cases and saves time in mixing.

Finally, I wish that Aston made a version of the Halo with US (5/8”) threading so that those of us across the pond don’t have to fight with threaded-ring adapters getting stuck in mics or shock mounts. Again, it’s a relatively minor complaint I have for multiple products.

If you have an opportunity to demo a Halo, you should. You may think your vocals are tight and dry but you may be surprised by how much of the less-than-obvious room sound you can eliminate with the right reflection filter.